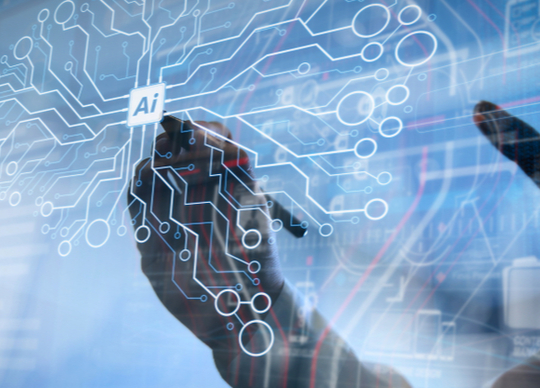 AI is, say the experts, set to revolutionise every aspect of connectivity. The zero-touch, software-defined, self-healing, threat-aware networks of tomorrow will be light years from the clunky, hardware-heavy, manually-driven connections of the recent past. We are currently at a transition point between these worlds.

AI-driven change is clearly needed if mounting challenges are to be addressed, argues Mark Leary, Research Director for Network Analytics and Automation with independent consulting firm IDC: “The recent Google Cloud outage is still being investigated, but it was identified as a networking issue,” he notes. “The Facebook problem a month ago, same thing, another networking matter. We’ve seen a wealth of these problems over the last few years. This is Facebook, Google, AWS, people with a lot of sophisticated expertise available to them. And yet they’re having trouble with the complexity that networks present to them.”

Pressure on network professionals is building: “The reality for most networking staff these days is that they’re faced with new kinds of responsibility,” believes Leary. “They are no longer simply deploying routers and switches, changing configurations and making minor tuning adjustments. They’re worried about the digital experience of the user, and getting involved in business outcomes. They’re doing more evangelism for the network with line of business units, talking about what the network can do for digital transformation.”

The drive is on to make networks better, but also simpler: “For that, we really have to turn to smarter systems that are driven by AI and machine learning,” he believes. “We need systems that take care of themselves so they can avoid the kind of problems we’ve seen in the last month. Da Vinci really did say it best when he said ‘Simplicity is the ultimate sophistication’.”

And yet while AI is riding a wave of popularity and recognition in multiple use cases across the enterprise, its role behind the scenes in the network is, says Leary, somewhat undercelebrated: “It’s not thought of like, say, robotics on the manufacturing floor, or the kinds of automation we’re seeing in healthcare and retail. Those draw a lot of attention from the press.”

But the reality for most organisations is not just about looking for the next high profile, cutting-edge AI application, it’s more about using AI to do better with the technology they already have: “IT and network automation is a top concern for senior execs,” says Leary. “It’s a tremendous opportunity for AI to bring its smarts, not only in areas like development and governance but also the triggering of automated events and directing of automated activities.”

“AI offers a more dynamic network infrastructure,” he explains. “One that’s easier to manage, that’s more secure and that is better at adapting to requirements as they develop. It’s not focused in on smart speakers and robots and all of that kind of thing. It’s about trying to figure out how to get better at delivering an infrastructure that’s truly resilient. Whether you’re small, medium or large, AI should be infused within your IT infrastructure. AI infusion is something that you don’t really see, but you realize the benefits soon enough.” 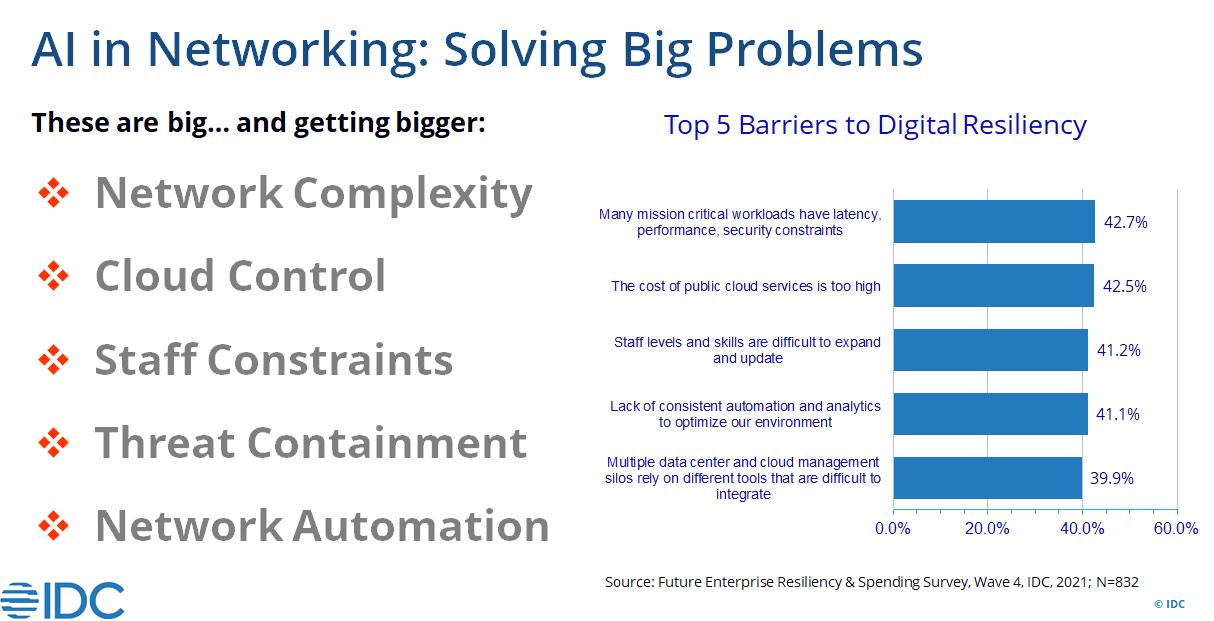 To broaden the discussion around AI and networking, Leary calls on a panel of expert names. What trends are these industry leaders noting?

Andrew Coward, GM, Software Defined Networking with IBM has noted among customers a trend towards gathering lots of networking data from different sources, perhaps WiFi or the wide area network, or possibly the cloud: “But then they find they can’t quickly solve problems,” he says. “The paradox is that the more information they’ve collected, the less clarity they seem to get. Attention is now switching to how how to use AI to separate out the noise and focus on what’s the real problem.”

Kevin Deierling, Senior Vice President with NVIDIA senses a sea change: “Enterprises want to be able to operationalize data by using machine learning to write a program that can then do inferencing to guide activities,” he says. “We’re seeing the atomization of the network, the breaking up of monolithic applications, the rise of containerized micro services. The impact is massive. Suddenly you’ve got a thousand times more east-west traffic inside of the network. And instead of being embedded into a single software program, you have connections between all these micro services and the zero trust environment.”

He also sees AI as critical in other areas, like natural language processing: “All of that is incredibly dependent on the network,” he says. “For someone to engage with an AI device and get human response times means that the network needs to be operating flawlessly. It all has to happen in real time, and there’s so much data being processed.”

But AI must not be seen as infallible, or the human element discounted, warns Gaurav Rastogi, Senior Director, R&D with VMware: “When decisions are built on AI, there will be false positives,” he says. “There needs to be a way to measure the efficacy of what AI is doing, and be able to test the waters. AI will never be black and white or offer 100% accuracy in decisions. There will always be times when it can be wrong and humans need to come in and help that out. Decisions must be in tune with what security or network admin intuition says.”

Coward of IBM is seeing some customers address this issue by building digital twins to test out what changes to their infrastructure might mean: “If the digital twin survives, then you know that you’re probably in a good place to post that to the rest of the network,” he explains. “There are some interesting ways of understanding a new model.”

When it comes to AI and networking, many enterprises are underestimating the possibilities open to them, fears Deierling of NVIDIA: “They’re expecting much too little,” he says. “I think that AI is going to be much bigger than people realize. In fact it’s the most powerful technology force of our time. And companies that realize that and embrace AI and infuse it into their businesses are going to succeed and companies that don’t are going to fall behind. I think in five years, or in a decade, every business will be an AI business.”

And when it comes to ideas like the digital twin, people again need to be thinking bigger than they are right now, he believes: “I don’t think people understand how large the virtual world is going to be. It’s much larger than the real world. We just announced a digital twin of Earth. People will define and build products in the virtual world. The key is to fail fast in the virtual world so that you can succeed in the real world. This is one of the ways in which AI is going to transform businesses. After all, you wouldn’t build a car or a plane without simulating. In data science, people will build a digital twin using AI to detect anomalous behaviour and network hotspots, everything modelled accurately and precisely.”

Rastogi of VMware also notes that customers are looking to AI for simplicity and automation: “They are expecting systems to take care of the fine tuning. And that is not going to be possible without AI. AI is going to be a core piece of how to figure out what is your baseline what are the optimizations in the system.”

He also see better security in the network as a critical AI-driven benefit: “Web application attacks are on the rise,” he points out. “The attack vectors you see are like 70% to do with credentials and 30% about misconfigurations. AI will build out solutions to protect web applications, protect the network and figure out if there is malware installed.”

In conclusion, Deierling of NVIDIA calls for a secure framework to build any AI application on top of. He gives the example of 5G: “We see a ton of use cases where people are using AI-enabled 5G for robotics and smart factories, and you need low latency and slicing for that. If you have a real platform that does 5G, then it really supports all those AI workloads whether that’s a kiosk in an airport that’s using natural language processing or avatars and visual analytics.”