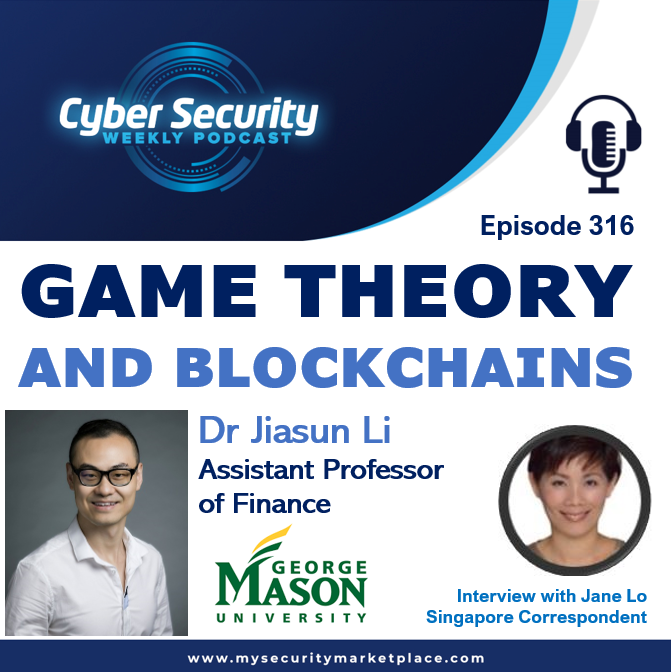 Jiasun received his Ph.D. in finance from UCLA Anderson School of Management and B.S. in mathematics from Fudan University (Shanghai, China) prior to joining George Mason.

His research interest covers FinTech (including blockchain and crowdfunding), as well as the theory of the firm, governance, and market microstructure.

Dr. Li is a winner of the Yihong Xia Best paper award and the Chicago Quantitative Alliance academic paper competition, along with many other paper prizes. He has also been voted by students as “Faculty of the Year” (one recipient per year from the entire faculty).

In this podcast, Dr. Li shares with the audience, how blockchains such as bitcoin interact with the field of game theory.

Dr. Li describes the challenges to achieving the basic premise of bitcoin and blockchain as distributed systems – that is, the ability to arrive at a general agreement (consensus) without a central authority when some participants may be rogue.

By referring to the Byzantine General’s Problem – a metaphor of this challenge – he highlights how communication between participants distributed across sites is a key feature.

He unpacks how this challenge is resolved in the bitcoin blockchain within the mining process. He also points out that the incentives to motivate participation in the process naturally involve game theory, which models situations where users strategize to optimize their own payoffs.

He also shares his research on mining pools, where like in lottery pools, miners pool their resources to optimize their risk-return tradeoffs. He explains how the strategic interactions between mining pools prevent over-concentration.

On how permissioned and permissionless blockchains compare regarding the applicability of game theory models, he relates to the concept of “repeated games”, and illustrates how repeated interactions may yield a different outcome to a single-shot game.

Referring to other famous disruptive cyber incidents in the blockchain world – such as the DAO or the 2010 bitcoin overflow – he suggests that all events could be modeled by game theory models, with trade-offs between releasing codes quickly vs spending time and resources in robust audits.

However, he cautions while game theory is a useful modeling tool, the reality is complicated and it is often difficult to capture the entire spectrum of possible actions.