Dell Technologies has released results from a global study that shows organisations are shifting their digital transformation programs into high gear and are on the path to accomplish in a few months what would normally have taken them years. The findings, updated biennially in the Dell Technologies’ Digital Transformation Index (DT Index), indicate organisations are accelerating transformational technology programs during the global COVID-19 pandemic.

In one of the first global studies to measure business behaviour as a result of the pandemic, Dell’s 2020 Index found that globally eight in 10 organisations, and 79 per cent in Australia and New Zealand (ANZ), have fast-tracked some digital transformation programs this year, and 79 per cent globally and 77 per cent in ANZ are re-inventing their business model.

The DT Index is a global benchmark indicating organisations’ status of digital transformation and their performance across the globe. The survey included 4,300 business leaders (C-suite to Director) from mid-size to enterprise companies across 18 countries.

ANZ is seeing more organisations embracing digital transformation with a 14-percentage point increase from 2018 in the number of Digital Adopters and Digital Leaders (the two most digitally mature groups). Globally, a similar trend is observed where organisations in the top two groups saw an increase of 17 per cent from 28 per cent in 2018 to 45 per cent this year.

“We’ve been given a glimpse of the future, and the organisations that are accelerating their digital transformation now will be poised for success in the Data Era that is unfolding before our eyes”, says Michael Dell, Chairman and CEO, Dell Technologies. 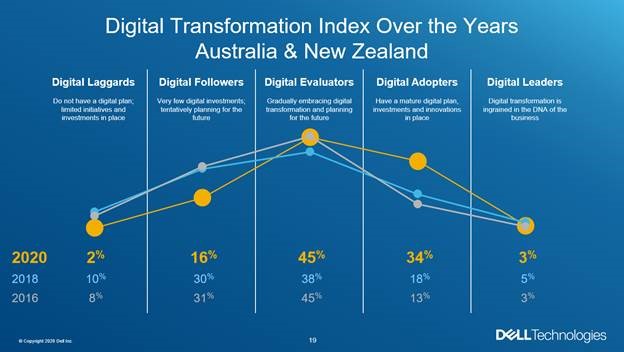 “Using a curve visual, the global DT Index plots digital transformation progress, from one wave of the DT Index to the next.” 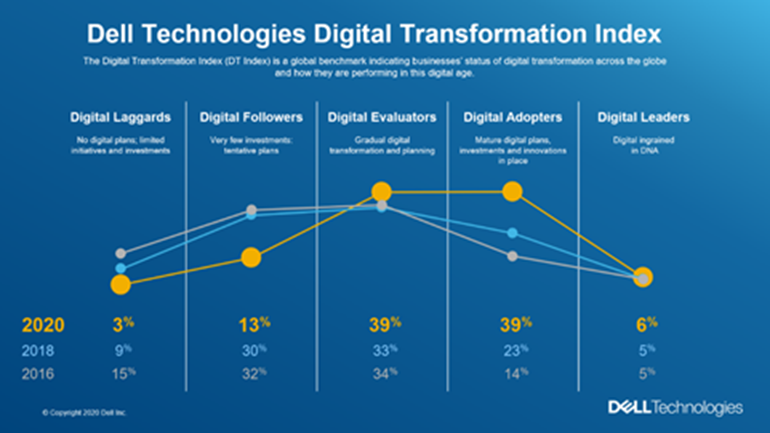 Responding in an uncertain world

Prior to the pandemic, business investments were strongly focused on foundational technologies, rather than emerging technologies. The vast majority, 89 per cent globally and 87 per cent in ANZ, recognise that as a result of the disruption this year, they need a more agile/scalable IT infrastructure to allow for contingencies. The DT Index shows the top technology investments for the next one to three years:

During July and August of 2020, Dell Technologies partnered with independent research company Vanson Bourne which surveyed 4,300 business leaders from mid-size to enterprise organisations across 18 countries, create a global benchmark indicating businesses’ status of transformation. Vanson Bourne classified businesses’ digital business efforts by examining their IT strategy, workforce transformation initiatives and perceived performance against a core set of digital business attributes. This is the third installment of the DT Index (the inaugural study in 2016 was followed by the second DT Index in 2018.)