The latest Canalys data shows that worldwide PC market growth accelerated in the last quarter of 2020, as shipments of desktops, notebooks and workstations increased by 25% from a year ago to reach a record 90.3 million units. These latest numbers exclude tablets. Ongoing strong demand in the holiday season led to a third consecutive quarter of sequential growth, with shipments in Q4 up 13% sequentially over what was a stellar performance in Q3. On the back of this remarkable recovery after a supply-constrained Q1, total PC shipments in 2020 grew 11% to reach 297.0 million units. This represents the highest full-year growth since 2010 and the highest shipment volume since 2014. Worldwide PC market growth in 2020 was singlehandedly driven by notebooks and mobile workstations. Shipments of these devices increased 44% from 2019 to reach 235.1 million units. Conversely, desktop and desktop workstation shipments fell 20% from last year to reach 61.9 million units in 2020. 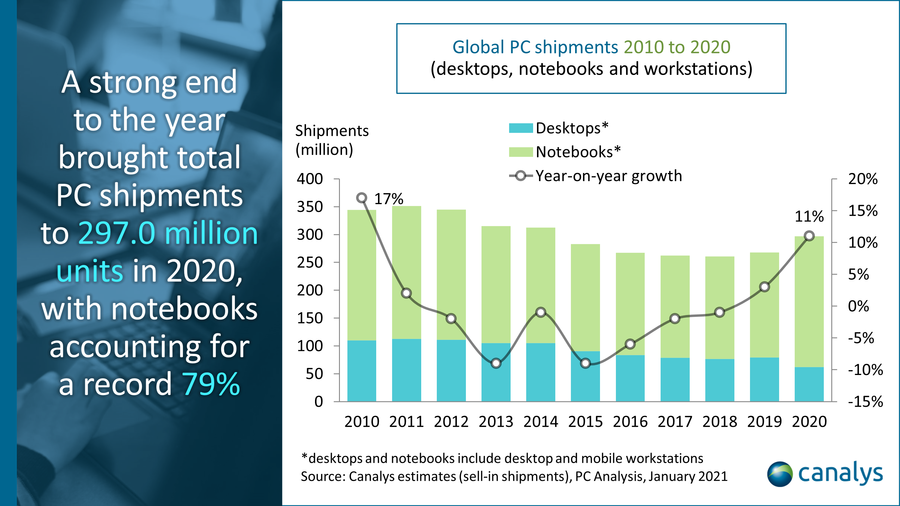 Lenovo held first place in the PC market in Q4 with record shipments of 23.1 million units and year-on-year growth of 29%. This meant it also took first place for the whole year, with total shipments of 72.6 million units and a market share of 24.5%. HP took second place in the annual rankings, with Q4 shipments of 19.1 million units, bringing its 2020 total to 67.6 million units, up 7% over its 2019 number. Third-placed Dell ended 2020 with a bang, with Q4 shipments up 27% to break the 15-million mark for the first time in its history, bringing its 2020 total to 50.3 million units. Apple and Acer took fourth and fifth place, shipping 22.6 and 20.0 million devices, respectively. In total, the top five vendors accounted for 78.5% of PC shipments in 2020. 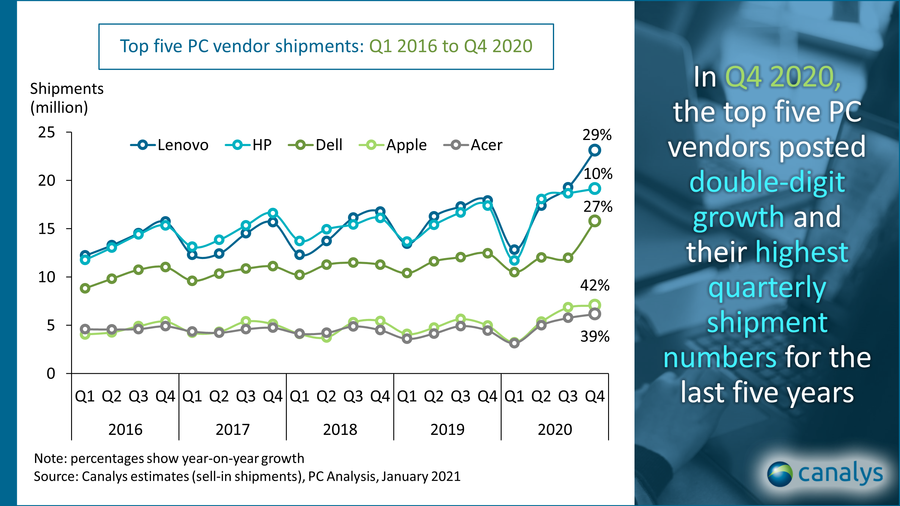 “The industry deserves all the success that has come its way,” said Rushabh Doshi, Canalys Research Director. “We would be in a very different position had it not been for the commitment of the PC industry, including the vendors, the supply chain and the distribution channel, to make sure that every bit of market demand was met. The digital transformation the world has undertaken over the past year is unparalleled, and PCs were at the heart of this change. As the world readies itself to get vaccinated and overcome the COVID-19 virus, it is important to remember that PCs have played a vital role at every stage of this fight, from understanding the virus and synthesizing the vaccine, to social monitoring and vaccine roll-out. It is going to be extremely difficult to write off the PC as some of us did a few years ago. PCs are here to stay.”

“2021 is shaping up to be an even more exciting year for PCs, with vendors and ecosystem players refusing to rest on their laurels as they compete for the new demand opportunities that have emerged in 2020,” said Ishan Dutt, Analyst at Canalys. “Innovations in chipsets, operating systems, connectivity and form factors will take center stage as the PC industry caters to a broader range of customers that bring with them new behaviors and use cases. From Apple and Microsoft’s new custom silicon to the exciting platform updates to Chrome and Windows, the PC industry is moving at breakneck speed to cater to its newfound user base. While supply shortages continue to dampen the market in the short term, Canalys believes most wrinkles will be ironed out by the second half of 2021.”

Note: Tablets (slates and detachables) are not addressed in this press release. Chromebooks are included as a subset of notebooks.