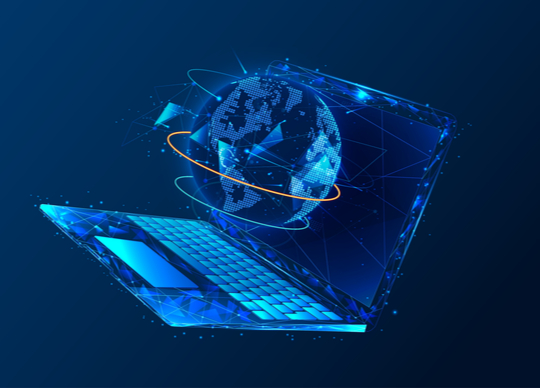 The second quarter of 2022 brought major disruption to the PC market, as COVID lockdowns in China stymied manufacturing.

The latest Canalys data shows total shipments of desktops and notebooks fell 15.0% annually to 70.2 million units, the lowest level since a similar disruption occurred in Q1 2020.

Demand headwinds, especially from consumers, have also ramped up as inflation remains unchecked in many of the world’s largest PC markets. Notebook shipments fell 18.6% in Q2 2022 at 54.5 million units, down for a third consecutive quarter as education procurement remained muted compared with the same quarter a year ago.

Desktops fared much better, posting modest growth of 0.6% to 15.6 million units as the strength of commercial demand amid the further opening of economies helped spur investment in desktop refreshes and upgrades.

The premium commercial segment will remain a bright spot for the overall PC market this year, despite mounting challenges in the global macroeconomic outlook. 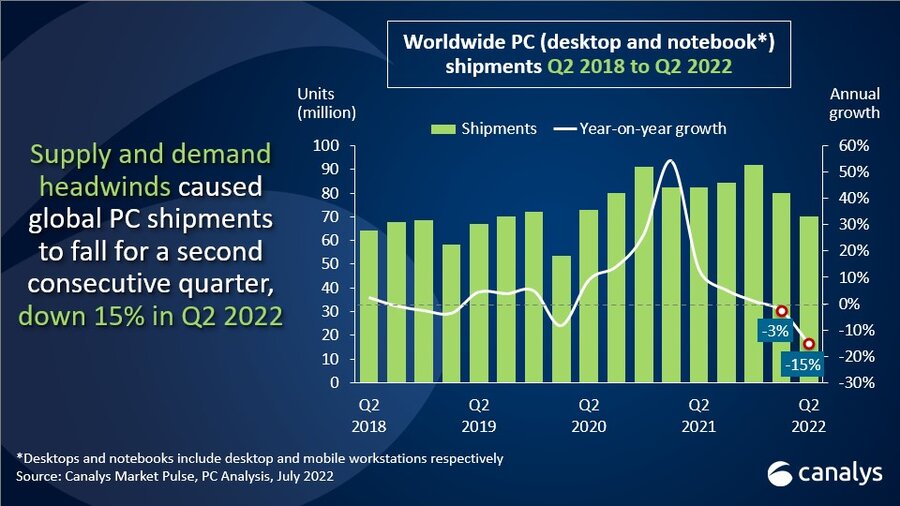 “As expected, COVID lockdowns in key regions and cities of China throughout most of Q2 severely affected the manufacturing and export of PCs,” said Canalys Analyst Emma Xu. “Disruption to factory and port operations in Shanghai, Kunshan and Jiangsu led to significant delays in orders for all the major PC vendors. Though production and coordination started to improve by the end of May, output was below normal levels throughout Q2. In addition, restrictions on the movement of people and goods and a reduction in business activity caused a sharp downturn in domestic purchasing in China, the world’s second-largest PC market. While indicators for consumer and commercial spending improved in June, the overall economic situation remains uncertain as the government’s Zero-COVID policy remains in place.”

Lenovo held onto first place in the worldwide PC market, though its shipments fell 12% to 17.5 million units in Q2 2022. HP suffered the biggest decline of the top five vendors, hurt by a poor comparison to its strong education shipments last year. HP’s total shipments fell 28% to 13.5 million units. Dell was close behind HP in third place, posting a relatively modest decline of 5% to settle at 13.2 million units, increasing its market share by two percentage points compared with a year ago. Acer and Asus completed the top five, with declines of 19% and 5% respectively. 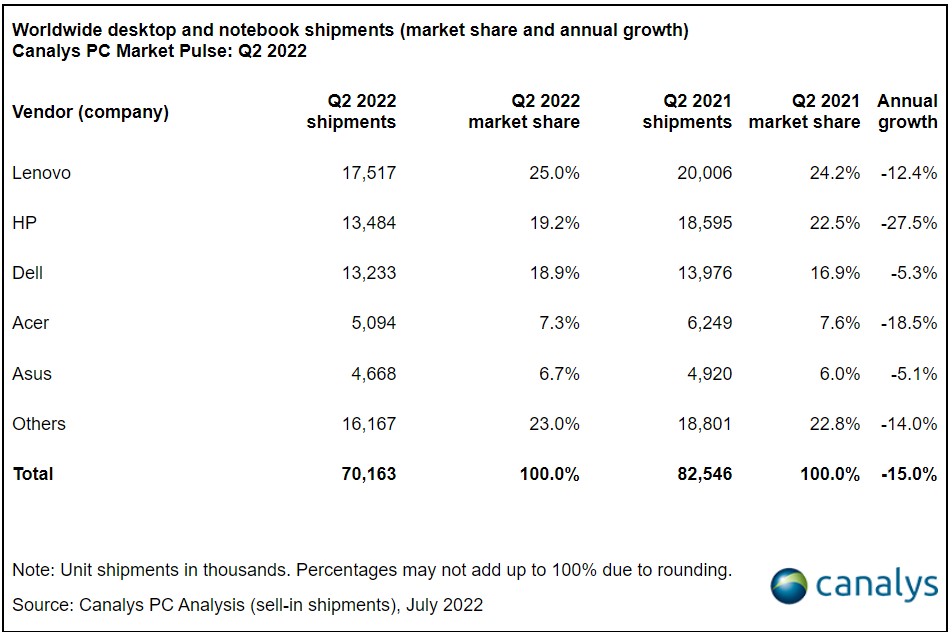 “From a demand perspective, the consumer and commercial segments are clearly diverging in short-term strength,” said Canalys Senior Analyst Ishan Dutt. “Worsening inflation is the dominant economic factor on consumers’ minds, and price increases across a basket of goods and services are relegating spending on PCs and other hardware behind more basic needs. While the importance of having a top-quality device hasn’t diminished, most PC owners with relatively basic computing needs will be content to ride out this period of economic uncertainty and opt to refresh their devices when the pressure on their budgets eases or if significant discounting by vendors and retailers occurs later in the year. Businesses are also facing the threats of inflation and rising interest rates, but investment in PCs and IT at large remains vital to digital transformation as part of post-COVID recovery. Vendors with strong commercial reputations, deep channel partnerships and portfolios geared toward high-performance business use cases will be best placed to mitigate the challenges facing the PC industry this year.”