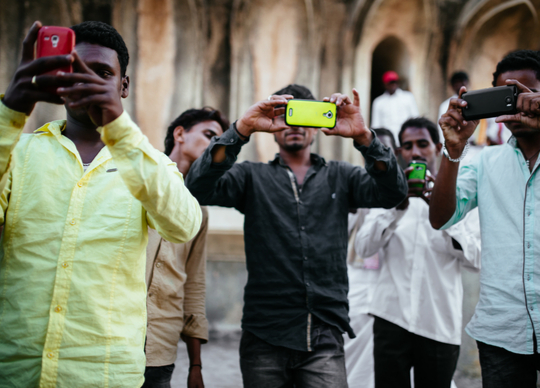 Vendors shipped 38.0 million smartphones in India in Q1 2022, just 2% more than a year ago, as the leading vendors suffered from intermittent supply issues. Xiaomi held onto first place with 8 million shipments, despite another quarter of sequential decline. Samsung came second with 6.9 million units, while realme delivered the most vigorous growth among the top five vendors, with shipments up 40% year on year at 6.0 million units. Vivo and OPPO completed the top five with 5.7 million and 4.6 million units shipped respectively.

“This is not a great start to the year for a market like India, which has seen double-digit percentage growth even during the pandemic,” said Canalys Analyst Sanyam Chaurasia. “While most of the world’s markets battled the third wave of COVID-19 in Q1, the relatively weaker impact on India should have helped it return to growth quickly. But supply remained the biggest challenge for the leading vendors, such as Xiaomi and vivo, and they struggled to secure components for their volume-driving low-end models. In contrast, brands such as realme, Tecno and Itel did remarkably well with solid supply to take on the market leaders and fulfill the low-end demand in Q1.” 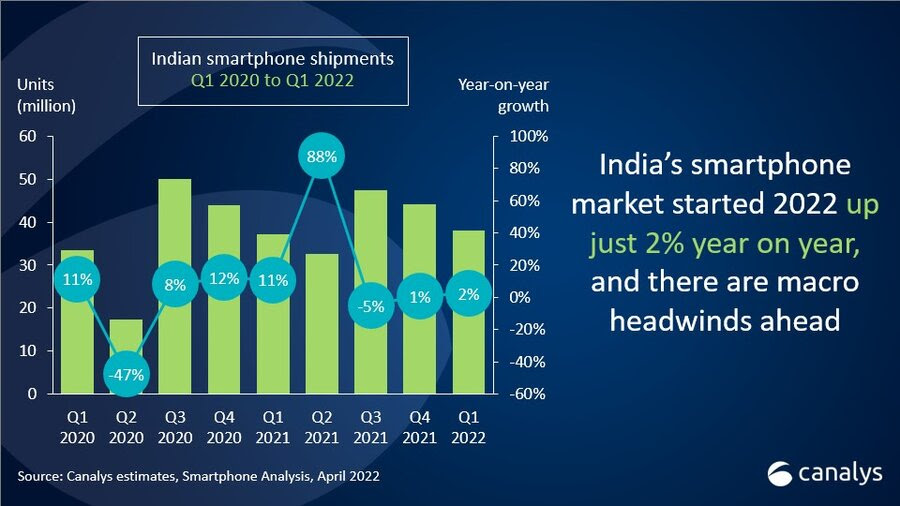 “Vendors are certainly taking steps to address the supply bottleneck,” said Chaurasia, “Sell-in started to improve from March. Channel companies are optimistic about healthy sell-in in Q2, with vendors preparing for a strong festive quarter. They are finding opportunities in the lower-tier cities and towns in India, where device penetration is still relatively low. It is more important than ever for vendors to focus on building a long-term offline channel strategy.”

“The biggest challenge vendors will face in 2022 will be maintaining device affordability,” said Chaurasia. “Oil prices in India are at an all-time high and wholesale inflation remains elevated, at 14.6% in March 2022. Volatility in foreign exchange rates and higher operational costs due to inflation will, in turn, put further pressure on vendors to maintain profitability. But as consumers increasingly rely on their smartphones, enticing them with payment schemes has never been easier, with multiple buy-now-pay-later partners mushrooming across the ecosystem. The mass market will remain India’s growth engine, and having a healthy portfolio in the mid-to-low-end segment will be key to maintaining strong consumer mindshare in 2022. Availability, affordability and attractiveness will be essential for smartphone vendors to succeed as multiple uncertainties lie ahead.” 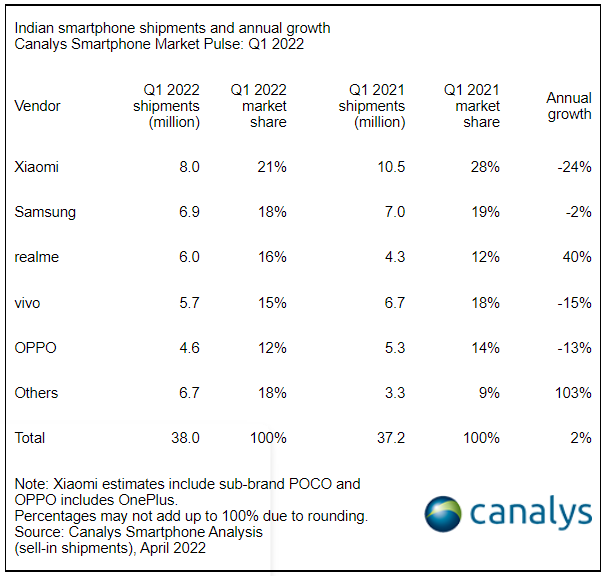