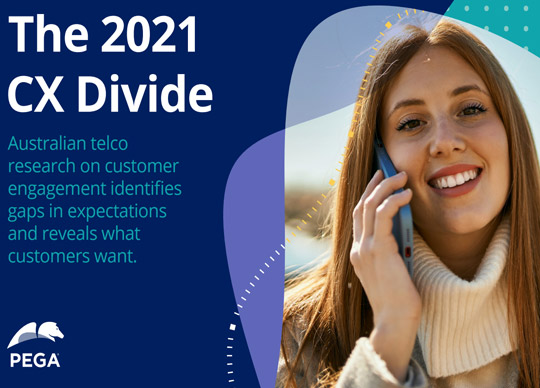 Customers frustrated with poor service will soon be given more freedom to change providers, and the telco sector must adapt to remain competitive

Pegasystems Inc. has pinpointed major industry-wide customer service and relationship management frustrations in the telecommunications sector as it unveiled the findings of its latest research, The 2021 CX Divide, in collaboration with OmniPoll. The research, which surveyed over 1,200 respondents in Australia, explored how customers interact with their telco providers and identified some of their biggest frustrations and concerns.

Of those who have interacted with their provider in the past six months, more than 70 per cent (71%) have encountered at least one problem during their most recent contact. The number one frustration identified by consumers was failing to find information or completing their enquiry online (44%). This was closely followed by longer than expected wait times, having to repeat their issue several times and being transferred from one agent to another (42%), as well as having to contact their provider several times to solve a problem (39%). Even after all that, almost half (44%) of telco customers surveyed were unable to get their issue resolved after the first contact.

The study also shows that telcos are failing to utilise and/or effectively deploy customer engagement technology. While customers rarely interact with their telco provider (only 23% interact several times a year), when they do, the majority of them still prefer traditional human interactions; 59 per cent would rather call or visit a store than attempt to navigate websites or smartphone apps, as these digital channels are failing to provide the “human” experience customers desire.

Telco customers in Australia are also showing great loyalty to their provider. The big four telco providers (Telstra, Optus, Vodafone and TPG/iiNet) boast long term customer relationships, with over half (59%) of their customers having a tenure of six or more years. However, with the Australian Competition and Consumer Commission (ACCC) introducing the consumer data right (CDR) across the telco sector, which aims to improve customers’ ability to compare and switch between products and services, telco providers must raise their game if they are to maintain this loyalty.

To improve customer satisfaction, telcos must invest in delivering better and more “human” digital service experiences, as well as improving traditional retail and call centre channels, providing a true omnichannel experience. A sizeable 86 per cent of consumers say their bank is easy to deal with, compared to less than three-quarters (71%) saying the same about their telco provider. With the majority of telco customers not using self-service and digital options, it is clear that organisations can win business and improve customer satisfaction by dramatically overhauling these systems.

Michael Evans, vice president ANZ at Pegasystems says “Given the challenging, and in many cases, frustrating process involved with switching providers, many consumers stay with their current telco provider not because they are happy, but because they feel switching will be too arduous. With the upcoming introduction of CDR, challenges associated with changing providers may soon be a thing of the past, making customer relationships pivotal to telco providers’ long-term success.

“With so many customers sharing the same frustrations, telcos need to acknowledge and address these issues. In doing so, organisations will foster more meaningful customer relationships based on delighted customers, instead of contented ones, which will be key as competition increases following the implementation of CDR,” Evans concludes.