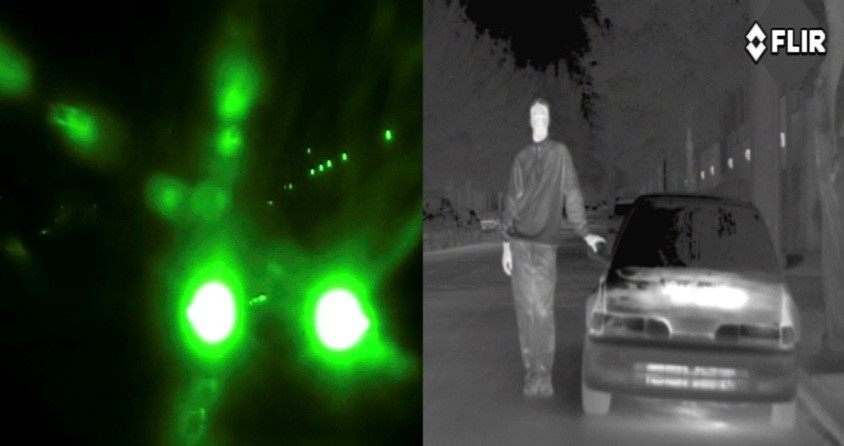 Law enforcement missions require officers to respond in a moment’s notice. FLIR’s line of thermal camera systems for law enforcement operations give officers the tactical advantage they need to respond effectively and safely, whenever they’re called.

FLIR Systems thermal imaging cameras are being used worldwide by police and customs departments and by private security companies that are sending walking patrols out to secure an area.

Thermal imaging cameras do not only produce a clear image in total darkness, they are also extremely useful during daylight.

Thermal contrast is extremely difficult to mask. Someone trying to hide in shadows or bushes and people that are trying to camouflage themselves, will become clearly visible on a thermal image. Thermal imaging cameras are also not blinded by glare from the sun. They produce a crisp image in practically all weather conditions.

FLIR Systems thermal imagers are powerful tools in the fight against crime. They allow you to see suspects in total darkness, through smoke, and light foliage. A FLIR handheld thermal imaging camera allows you to see the suspect, without revealing your own location.

Thermal imaging versus image intensification (I2)

Image intensification, also referred to as I2 technology, amplifies small amounts of visible light thousands of times so that objects can be seen at night. Image intensification does require a certain level of ambient light, but even starlight can produce an image on a cloudless night.

Thermal imaging cameras offer substantial benefits over image intensification. They are not affected by the amount of light so that you will not be blinded when looking at a light source.

Image intensification: image is saturated by looking directly to a light source.

Thermal imaging: is not affected by the light and produces a clear image.

FLIR HS-Series: the power of thermal imaging in the palm of your hand

The HS-Series are portable shock-resistant thermal imaging cameras. They produce a crisp image in the darkest of nights. Thanks to the HS-Series, security professionals and law enforcement officers can see suspects in total darkness, through smoke, and light foliage.

The H-Series are excellent tools for walking patrols that need to secure industrial sites or borders, customs and law enforcement officers and all others that need to see what is happening in total darkness, in all weather conditions, without being seen themselves.

Being a monocular the HS-Series are extremely compact and lightweight. They can easily be stored in a pouch or hung on a belt. Another advantage of a monocular is that you always have one hand free.