Recently released Canalys data shows the global PC market climbed 12.7% from a year ago to reach 79.2 million units in Q3 2020 as it continued to benefit hugely from the COVID-19 crisis. This is the highest growth the market has seen in the past 10 years. After a weak Q1, the recovery in Q2 continued into Q3 this year, and it even grew on top of a strong market the previous year. Global notebook shipments touched 64 million units (almost as much as the record high of Q4 2011 when notebook shipments were 64.6 million) as demand continued to surge due to second waves of COVID-19 in many countries and companies continued to invest in longer-term transitions to remote working. Shipments of notebooks and mobile workstations grew 28.3% year-on-year. This contrasted with desktop and desktop workstations, which saw shipments shrink by 26.0%. 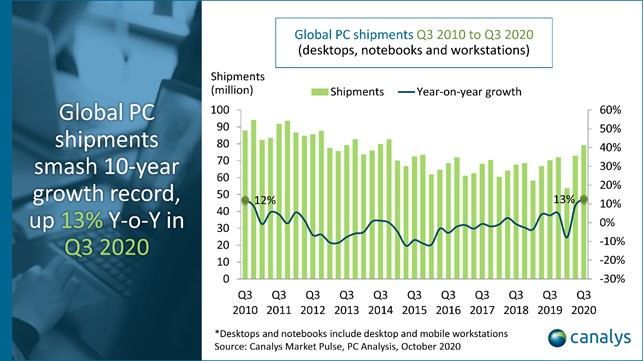 Lenovo regained top spot in the PC market in Q3 with growth of 11.4% and shipments surpassed the 19 million mark. HP posted a similarly impressive growth of 11.9% to secure second place with 18.7 million units shipped. Dell, in third, suffered a small decline of 0.5% in shipments from a year ago. Apple and Acer rounded out the top five rankings, posting stellar growth of 13.2% and 15.0% respectively.

“Vendors, the supply chain, and the channel have now had time to find their feet and allocate resources towards supplying notebooks, which continue to see massive demand from both businesses and consumers,” said Ishan Dutt, Canalys Analyst. “After prioritizing high-value markets and large customers in Q2, vendors have now been able to turn their attention to supplying a wider range of countries as well as SMBs that faced difficulty securing devices earlier this year. Governments, which have realized the importance of PC access in maintaining economic activity during this time, have intervened with financial support or even full-scale device deployments. This has been especially critical in the education space, with school terms commencing in Q3 without the possibility of on-premises learning in many markets. For example, the UK government made 100,000 notebooks available to ensure students, unable to return to classrooms, face minimum disruption in their ability to receive an education. Canalys expects IT expenditure, including investment in PCs, to be a core driver of economic recoveries in the aftermath of the pandemic.” 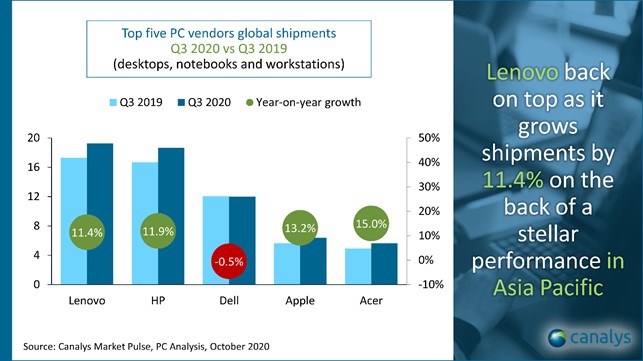 “The lasting effects of this pandemic on the way people work, learn and collaborate will create significant opportunities for PC vendors in the coming years,” added Rushabh Doshi, Canalys Research Director. “As the line between work and home lives is increasingly blurred, it becomes important to position devices towards a wide array of use cases, with a focus on mobility, connectivity, battery life, and display and audio quality. Differentiation in product portfolios to capture key segments such as education and mainstream gaming will also provide pockets of growth. And beyond the PC itself, there will be an increased need for collaboration accessories, new services, subscription packages and a strong focus on endpoint security. These trends will most benefit vendors who provide holistic solutions that enable their customers to make structural changes to their operations. Although the focus has been on commercial PC demand in the last two quarters, consumer spending during the holiday season is set to bring more joy to the PC market.”