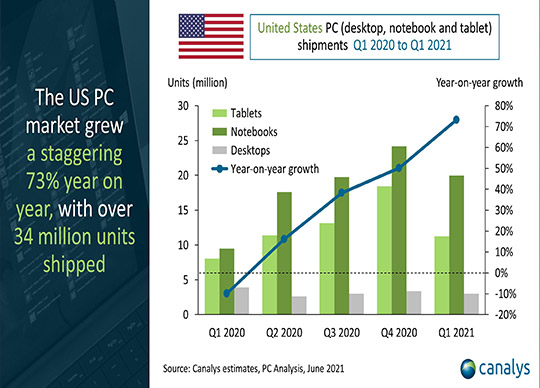 The PC market in the United States grew 73% year on year in Q1 2021, with total shipments of desktops, notebooks, tablets and workstations exceeding 34 million units. Notebooks and tablets led the way with impressive growth, while desktops lagged amid weak demand during the pandemic. Notebook shipments grew by 131% year on year, driven by order backlogs and continued demand to support remote work and education. Meanwhile tablets performed well, with 52% growth and 11 million units shipped as demand spilled over from the Q4 holiday period.

“The PC industry recorded incredible shipment numbers in Q1 2021, though some of this growth can be attributed to the industrywide struggles seen in Q1 2020,” said Canalys Research Analyst Brian Lynch. “Even so, Q1 2021 still rates as one of the best first quarters the industry has ever seen. Vendors have prioritized fulfilling US backlogs before supply issues are addressed in other parts of the world.” 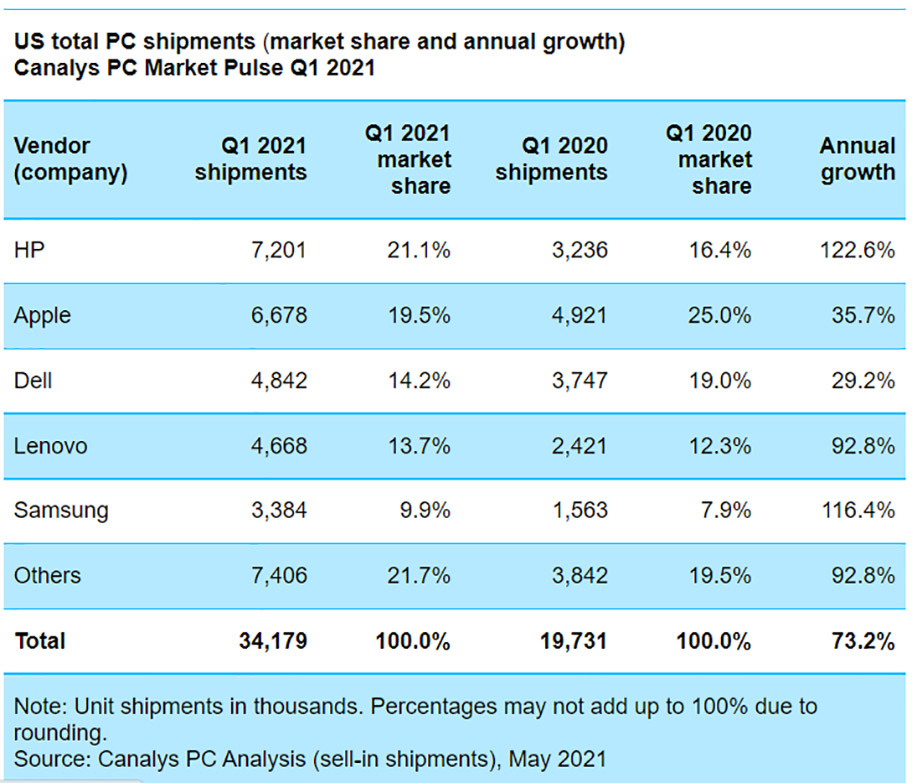 HP led vendors in the US with over 7 million devices shipped in the region, driven by fulfilling commercial backlogs and strong Chromebook performance. For the first time since Q3 2019, Apple lost its position as the top PC vendor in the US (including tablets), despite posting 36% growth. Nevertheless, Apple performed well considering Q1 tends to be a weaker quarter for Mac and iPad shipments. Lenovo and Samsung both recorded incredible growth at 93% and 116% respectively. Much of the record-breaking growth over the past year occurred due to the surge of Chromebooks for education alongside 92% year-on-year growth in the consumer segment. Third-placed Dell saw shipments increase by a relatively modest 29%, due to its weaker position in the consumer and education segments.

“Chromebooks were the fastest-growing category in the US in Q1,” said Lynch. “The platform has seen unprecedented growth over the past year in the US, spearheaded by its dominance in the education space.”

The US market for Chromebooks has grown by 548% over the past year. Samsung led US Chromebook vendors in growth with an astounding 1,963% growth over the past year as it made its entrance in the US market. Despite this, Chromebook growth was shared among most US vendors, with Asus, HP and Lenovo each posting rises of over 900%. Ongoing investments in digital education mean that the trends seen in this segment will continue in the long term. “There is no return to normal for education,” said Ishan Dutt, Senior Analyst at Canalys. “The PC’s role in the classroom will remain strong for years to come, ensuring ongoing demand for Chromebooks. The growing Chromebook installed base will lead to consistent upgrades and support for the product line. Educational institutions, teachers and parents have made investments in digital curricula and processes that they will not want to abandon.” 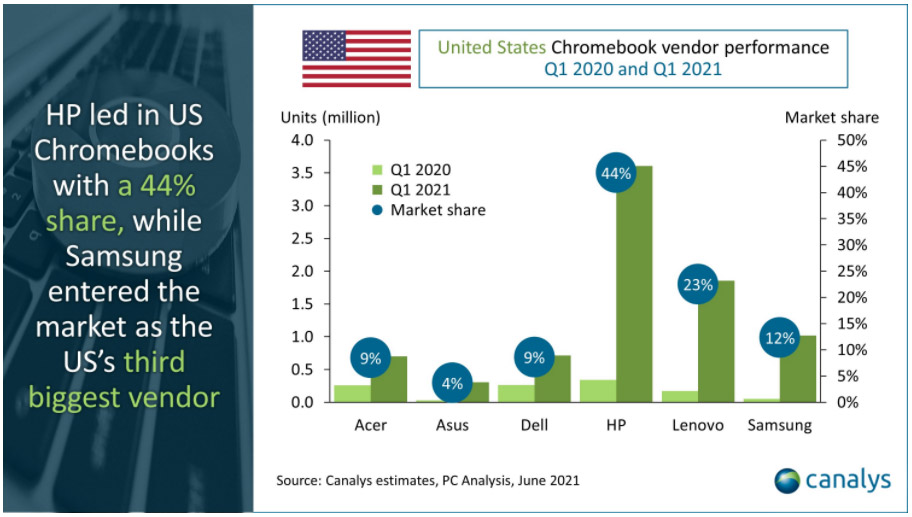 Looking ahead, several trends will support ongoing PC growth in the US. Supply issues continue to hinder the industry and Canalys expects unfulfilled demand to spill over into the early part of next year. To help address the supply issue, the Biden administration is planning to invest nearly US$50 billion in semiconductor manufacturing. This will limit future chip shortages domestically if successfully implemented, which will be vital as future shipment volumes will remain at an elevated level even as growth slows. Furthermore, some portion of the administration’s US$2 trillion infrastructure plan is set to provide a boost to public sector procurement. 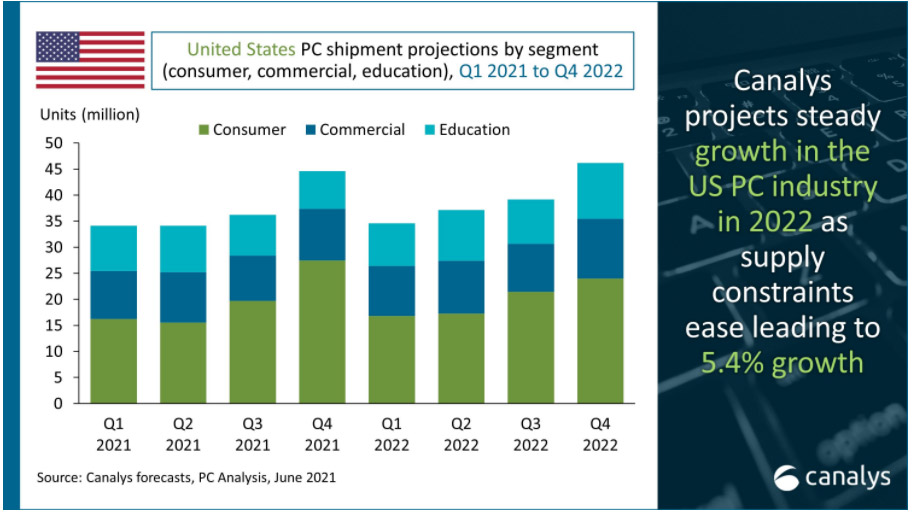 Federal stimulus checks boosted consumer demand marginally, primarily for young families adjusting to the summer break from school and young consumers eager to spend their pay checks. Labor surveys indicate that a sizeable portion of US workers will prefer to work from home even after the pandemic subsides. This, coupled with many US firms seeking to save costs by reducing office footprints will lead to continued demand for devices to support the next phase of voluntary remote working.