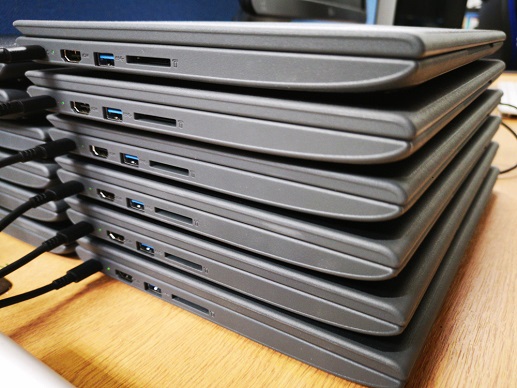 The latest data from Canalys shows worldwide PC shipments (including tablets) suffered a second consecutive quarter of decline in Q2 2022, falling 14% to 105 million units. Several issues, including rising inflation, COVID-related lockdowns in China, and falls in consumer and education spending, contributed to a difficult quarter for the industry. Tablets fell for a fourth quarter in a row, down 11% year on year this time, with 34.8 million units shipped worldwide. Chromebooks also fell for a fourth consecutive quarter, but endured a much starker decline, with shipments down 57% to 5.1 million units in Q2 2022 as demand from the education sector continued to wane. 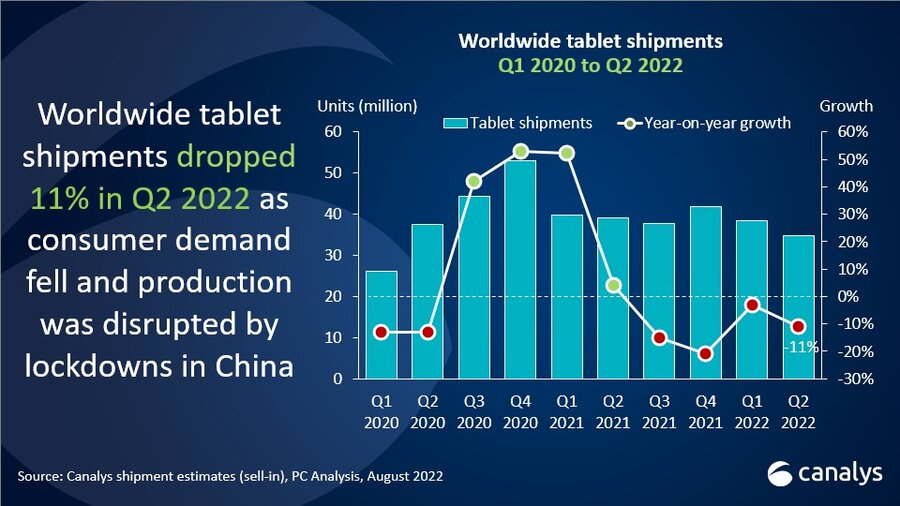 Following a prolonged surge during the pandemic, worldwide tablet shipments are on a downward trend, falling 11% year on year in the second quarter of 2022 as consumer and education demand faded. Market leader Apple fell 15%, shipping 12.1 million iPads worldwide. Samsung came second with 7.0 million units shipped, maintaining a consistent market share despite a 13% annual decline. Lenovo was third in the rankings with a 25% year-on-year decline in shipments to 3.5 million. Amazon held onto fourth place with a growth of 6% as it shipped 3.3 million units. Huawei rounded out the top five, with a 26% year-on-year drop and 1.7 million tablets shipped. 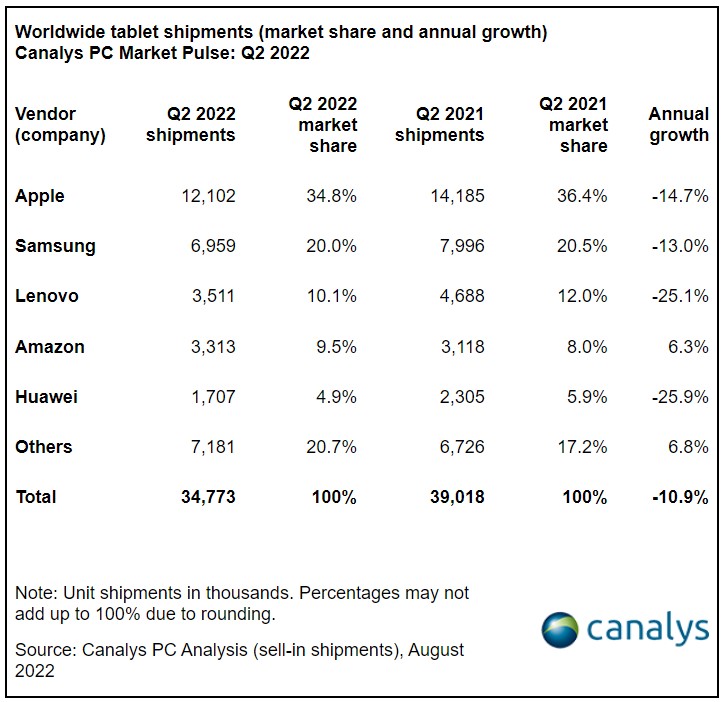 “The rapid fall in consumer and education demand has accelerated the decline in tablet shipments as we move further from the peak of the pandemic,” said Canalys Analyst Himani Mukka. “Inflation and fears of a recession are at the forefront of consumers’ minds, and spending on tablets has taken a backseat as the need for pandemic-era levels of use has fallen. Unlike notebooks, tablets are not vital for business productivity, so commercial demand has not helped to offset the drop in consumer purchases. Though consumer weakness is expected to persist into Q3, back-to-school offers and new tablet launches ahead of the holiday spending season will provide a minor lift in demand. On the commercial side, the outlook is more optimistic, though shipments remain relatively small. Substantial orders from governments in major Asia Pacific markets remain in place and are expected to be delivered as supply chain bottlenecks and inflation concerns ease. Countries in the region are turning toward domestic production as governments actively encourage citizens to buy locally manufactured goods. Many prominent players, including Lenovo, Acer and Samsung, have already jumped on board with this shift, particularly in India.” 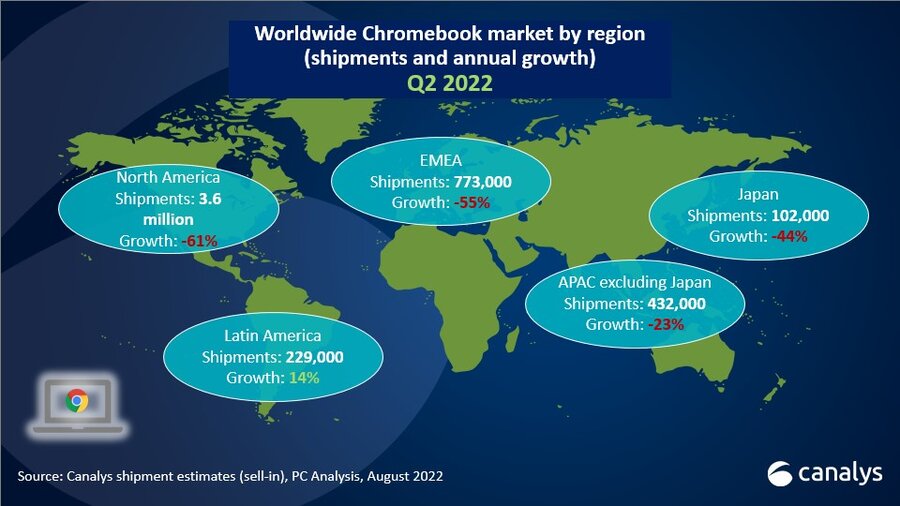 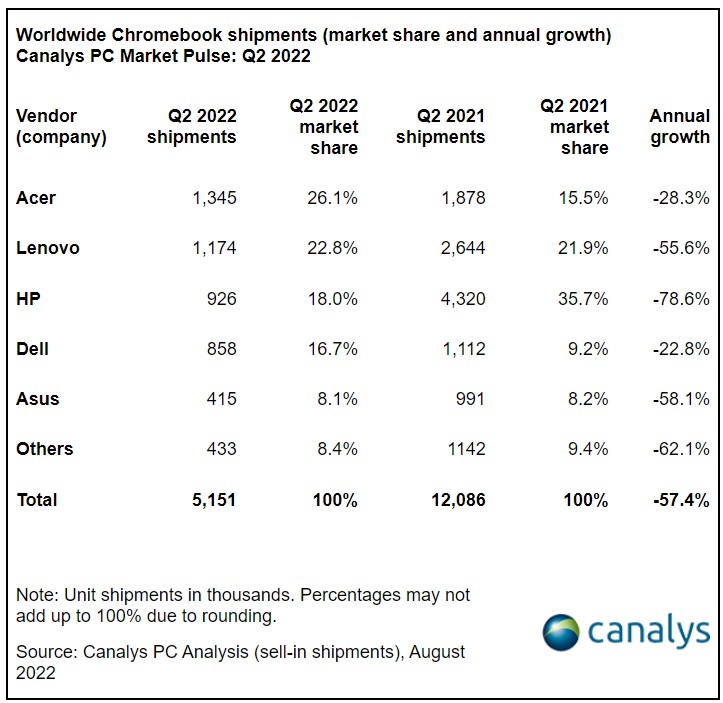 The global Chromebook market stumbled after the surge in education demand in key markets a year ago. Acer emerged as the leading Chromebook vendor in Q2 2022, securing over a quarter of the market as its shipments fell 28%, a relatively small decline against those of its main competitors. Lenovo held onto second place despite its shipments falling 56% from a year ago. HP suffered the largest decline of the top vendors due to its reliance on the US education sector, with a 79% decline in shipments. Dell and Asus made up the rest of the top five.

“Chromebooks have now been hit by year-on-year shipment declines every quarter since Q3 2021,” said Canalys Research Analyst Brian Lynch. “This period of negative growth has been an expected transition following the saturation of the category’s two largest education markets, the US and Japan. Now, the global Chromebook market is set for a period of more consistent performance, with lower shipment numbers and more traditional seasonality than was seen during the pandemic. In recent months, there has been a major buildup of Chromebook inventory in the channel amid the slowdown in demand. While mostly due to waning education demand, Chromebooks have also struggled in the enterprise segment of late. Channel partners have signaled a conservative outlook on the market’s growth prospects and many still don’t carry the category. Despite the recent large declines, Chromebooks are shipping in significantly higher numbers than before the pandemic and have now posted two consecutive quarters of sequential growth. Future digital education initiatives in a variety of countries will continue to focus on Chrome OS devices, offering renewed growth opportunities.”

Lenovo led the total PC market (desktops, notebooks and tablets) as it shipped 20.9 million units worldwide to take a 20% share of the market. Second-place Apple posted shipments of 16.6 million units and a 19% year-on-year decline, as it was badly affected by the supply chain disruptions brought on by lockdowns in China. HP secured third place, with a 27% drop in shipments to 13.6 million units. Due to spillover demand from Q1 and its strength in the commercial space, Dell had the smallest decline of the leading vendors, with 13.3 million units shipped and a one percentage point gain in market share. With 7.7 million units shipped, Samsung took fifth place in the worldwide market in Q2 2022. 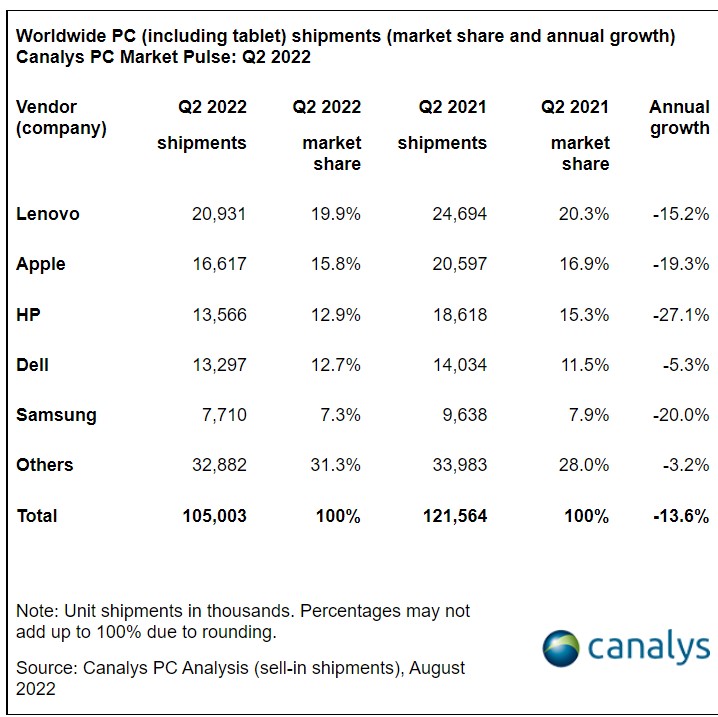