Professionals Australia is calling on the information and communication technology (ICT) sector to do more to address gender diversity, discrimination and sexual harassment against women after the ICT Professionals Employment and Remuneration Report 2021 found little was being done by industry to address these significant workplace issues.

Professionals Australia CEO Jill McCabe said the report should act as a ‘wake up call’ to an industry that has not taken meaningful action  to include and support women in the sector.

“This report clearly demonstrates that more needs to be done to attract, retain and support women working the ICT sector.

“The proportion of women employed in ICT is still very low. Only 28% of ICT employees are women, compared with all other professional industries where women represent 45% of the workforce.

“While 76% or survey respondents said that their organisation had policies in place to deal with discrimination, these policies were clearly not working with 56% of women reporting they had experienced discrimination on the basis of gender over the past three years, compared to just 2.8% of men.

“Most concerningly, over 20% of women reported experiencing sexual harassment.

“Discrimination and sexual harassment in the workplace are illegal, damage the careers of affected workers and impact negatively on their health and safety.

“While workplace policies are a necessary starting point, organisational leaders need to drive, model and embed a culture of respect across their organisations.

The report also found that wage growth in the ICT was generally low, with an increase of just 1.4% this year while 42% reported they had not received a pay increase in the previous 12 months.

“As we emerge from the COVID-19 economic downturn I urge all leaders across the ICT sector to use this moment as an opportunity to reshape their organisations for the better.

“Instilling greater diversity, fairness and balance into ICT workplaces is an investment which will return long-term social and economic benefits for the future of the sector” Ms McCabe said. 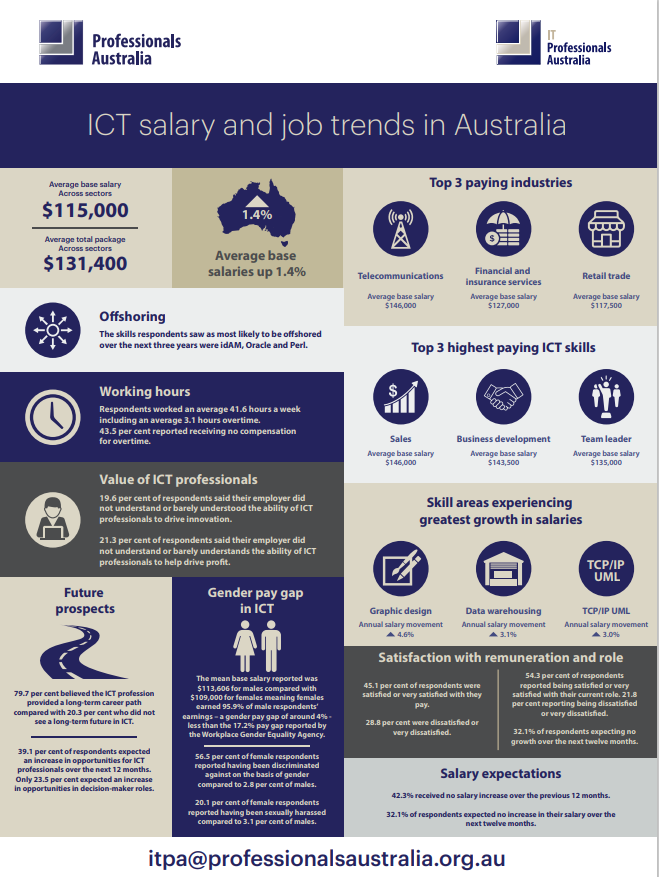