Intent Based Networking is on a roll. It looks like COVID-19 has barely touched the brakes 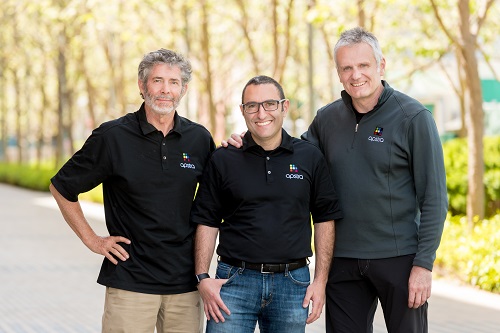 David Cheriton is a computer science professor at Stanford University with a serious reputation for advanced thinking on Distributed Systems. Unlike most academics I know, he combines that with uncanny insight into technology market opportunities. He was among the first to invest in Google, and the 20 plus companies he has invested in include VMware, Arista and his latest venture, Apstra – a company that, since he co-founded it in 2014, has launched IBN (Intent Based Networking) into the stratosphere of (oft-misapplied) industry buzzwords. So, the opportunity to interview David (as CEO) along with his Apstra Co-Founders Sasha Ratkovic (CTO) and Mansour Karam (President) was just too good to miss.

What, in a nutshell, is Apstra all about?

I somewhat unkindly began by reminding David about some advice he gave at a NetEvents keynote to a room full of Venture Capitalists: “never invest in anything you can’t explain to your mother”. Could he explain Apstra in such terms? He could: “Automate the configuration, monitoring and root cause identification of your network so you need fewer people – reducing cost, improving reliability and allowing faster deployments.”

For those who grok easier with metaphors, Sasha likens the composition of IT resources to an orchestra: “Imagine an orchestra where players cannot hear other players or see the conductor in real time. The resulting performance would be disastrous. We see these disasters and outage horror stories today when the real-time operational analytics capability is not present.” Whereas an Intent Based Network “is akin to having players listen in real time to what other players as well as conductor are doing and reacting to it”.

More basic was Mansour’s comparison with an automated vehicle. “Find the nearest free space and park” is a simple intent that embraces an extremely complex array of instructions, operations and real-time decisions. So you want a vehicle (or network) operating system with sufficient intelligence to grasp the intent, compare it with the entire current network status (compare with vehicle position, orientation, speed etc) and then make informed, ongoing decisions towards realising the intent.

A great idea, but was it timely?

Still seeking to stretch David on the rack of past opinions, I quoted another of his investment tips: “never investing in a start-up that only exists for one reason”. Could he name three reasons for investing in Apstra? Again, he could:

I did not expect great dissent from such a well-knit team, but it is worth comparing their responses. Mansour – with his great track record for launching high tech infrastructure companies – began with a broad vision: “The increased importance and complexity of networking is a foundation of everything we do.” Again he pointed to the human factor: “It was clear software was going to be far speedier, far more reliable, and far smarter than humans at managing networks of increasing scale and complexity.” Second came APIs: he pointed out that customers were compelling vendors to open up their APIs and “without these APIs, there wouldn’t have been a way for our software to interface with networking devices”. His third reason reflected that – with the surge in vendors, cloud, ML and AI – it was becoming a lot more difficult to build networks sourced from a single vendor.

Sasha’s emphasis was not so much on operations as initiation. First, the growing pain of composing infrastructure involving more components from more diverse vendors playing more roles and with greater dynamism. Secondly: “more and more technologies becoming available to deal with this problem, especially in the area of distributed systems.” Finally: “the barrier for entry was quite high due to complexity of the domain space and…” He concluded with a wonderfully pragmatic observation from a man renowned as a thought leader in domain abstractions and data model driven automation: “…having David Cheriton back it up provided an unfair advantage over the possible competition.” Take note, would be investors!

Where are we six years later?

It is always fascinating to look back at previous predictions in the light of current knowledge. David Cheriton had said that, when he first began suggesting the IBN concept, people asked “what’s the point, if everything is moving to the cloud?”. Back then they thought that the private database had had its day, and David did not agree. Has he been proven right? “Yes, definitely.  The so-called public cloud is now viewed more as surge space and experimental space than a place to run your 24/7 IT operations.”

But is this just a swing of the pendulum between public and private systems? Although the public cloud continues to grow: “I also don’t see the world returning to the hype that everything is moving to the public cloud.  I think the cycle will be more along the lines of out-sourcing vs. bringing it in-house, perhaps at the management layer of IT, rather than at the hardware level.  For example, if I have a private cloud plus use several public clouds for certain apps, who is managing all this?  Do I contract this out or do I have people on staff to run it?”

Back then, Gartner commended the Apstra solution but commented that the company faced a difficult task of “changing how enterprise network teams think about the build and operation of their data center networks”. How has that task progressed since 2014? For Mansour: “While networking teams are generally conservative, they have no choice but to transform how they operate their networks. Why? Digital transformation… Quoting Gartner, ‘businesses are 3 times more likely to fail in their digital transformation efforts if they don’t transform their networks first’”.

The impact of Covid-19

Apstra is in the business of improving networks and so, ultimately, optimising human business and communications. That placed it squarely among those fortunate companies that could gain from lockdown – as opposed to those, like hospitality, live entertainment and transport, with so much to lose.

Mansour pointed out that the Coronavirus crisis is forcing all businesses to accelerate their digital transformation efforts (notably secure networking to the edge), and David took that further: “With the pandemic, IT technologies in general are providing enormous value – allowing work-from-home, better information, support for vaccine development. With the new normal of social distancing, automation is key to reducing the number of people required and the proximity with which they need to work, and the network is the foundation for it all, so network automation is fundamental.”

Specifically addressing lockdown Mansour added that working from home: “has forced all organisations to beef up their networks and apply policies, not only to their headquarters or certain locations, but to every home. Metrics are getting a lot more distributed with a lot more remote sites. And you need to manage this without sending someone to every one of those locations. You need to apply the policies, and make sure the network is running reliably. You can’t do this without an intent-based networking layer providing full automation and remote control”.

I reminded Sasha that he had once written that “Change is not our enemy, it is a fact of life”. I pointed out that G2 2020 has seen unprecedented changes and asked him how we are all now adapting to the current “facts of life”. He replied: “The context of that article was that operators need to embrace change… IT services will evolve, service will evolve, innovations will be coming their way and they need to be ready to deal with that transformation. Apstra AOS enables you to deal with these changes reliably, and therefore you are guaranteed to be future proofing your IT investment as you will be comfortable knowing that you can handle transformations coming your way.”

There is no doubt that Apstra in 2020 is in a strong position and – unlike many companies that started the year on a high note – continues to forge ahead. One of the key things that attracted David Cheriton to the Apstra concept was that it had what he described as “the potential to add real value to the world”. Sasha had made the point that, in these times of uncertainty, Apstra was adding even greater value.

Faced with three such proven and highly successful, visionaries, the final question simply had to be: “Now in 2020, what technologies other than IBN, are adding, or are going to add, real value to the world?”

For Sasha: “Under this umbrella term ‘automation’, there is a large scale, sophisticated one that Gartner calls ‘hyper-automation’. Secondly: as computational needs are exploding it is natural to place data collection and processing as close to the source as possible which was the primary reason for emergence of edge computing. Finally, cloud as an experience will continue its momentum, but the lines between public and private cloud will be blurred, both from the implementation and consumption perspective. Democratization of technology will allow enterprises to consume IT in the way only cloud providers were able to offer in the past. Democratization of technology will also raise and augment human skills, for example enabling developers to generate data models without needing the skills of a data scientist.”

For Mansour networking is still the key focus: “The more powerful and far reaching our network is, the more life changing applications on top of networking will become.” He backed that with three examples:

Thank you so much David Cheriton, Sasha Ratkovic and Mansour Karam for your time and your insights. The phrase “network automation” brings together what must currently be the two most important concepts in IT and business. Amid profound changes, Apstra remains standing on rock solid ground.