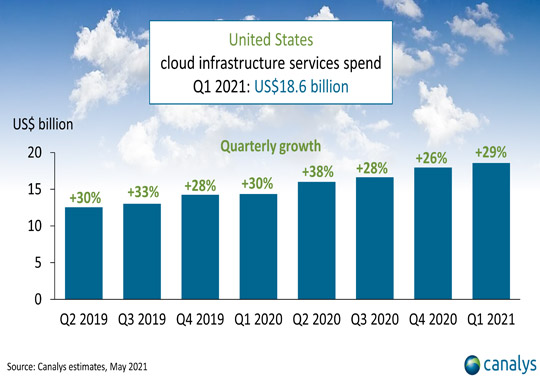 Cloud infrastructure services spend in the United States grew 29% in Q1 2021 to a record US$18.6 billion. Total expenditure increased US$4.2 billion in the last year and US$621 million in the last quarter according to the latest Canalys data. Dollar for dollar, annual expansion was the highest in two years, indicating robust demand for cloud services. The focus on digital transformation during the COVID-19 pandemic was the main factor behind the continued investment momentum, aided by the economic recovery and subsequent restart of some delayed projects. Government cloud spend is set to increase in the coming year with the clear intention to modernize technologies and increase cybersecurity practices. In response, the major cloud providers are expanding infrastructure in the United States and building out dedicated services. Overall, the United States was the largest market in Q1 2021, accounting for 44% of global spend, followed by China with 15%. The top three cloud service providers in the United states were AWS, Microsoft Azure and Google Cloud, which collectively accounted for 69% of total spend.

The relevance of digital services is increasing thanks to ongoing remote working and learning, content streaming, gaming and ecommerce. Larger enterprise digital transformation projects are also returning to the forefront with renewed economic confidence. The story is similar inside the US government, which recently added US$1 billion to the Technology Modernization Fund as part of the larger pandemic response stimulus, the American Rescue Plan.

“Cloud service providers have a big opportunity with the US government, not only with its stated desire to modernize technologies, but also its renewed focus on cybersecurity efforts,” said Canalys Vice President Alex Smith. “The recent SolarWinds hack affected nine federal agencies and the Colonial Pipeline hack exposed the high risk all organizations face. With intense competition over large government cloud contracts, such as the US$10 billion JEDI contract, a security advantage will pay off for bidding cloud service providers.” 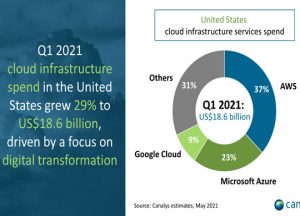 As modernization accelerates across the United States, the cloud providers are building out infrastructure rapidly. AWS is the number one provider with a 37% share of cloud infrastructure spend in the US and seven active regions. To expand on its regional coverage, AWS recently added a second local zone in Los Angeles and has plans to build new local zones in New York City, Chicago and Atlanta in 2021.
Microsoft Azure is the second largest provider with a 23% market share, and currently maintains eight live regions in the US. It has expansion plans for Georgia and Arizona in 2021, but more growth is expected as it recently announced plans to build out 50 to 100 new datacenters each year worldwide.

Google Cloud holds 9% of the US market, and it launched two new regions last year in Salt Lake City and Las Vegas, bringing its total count to seven regions in the US.