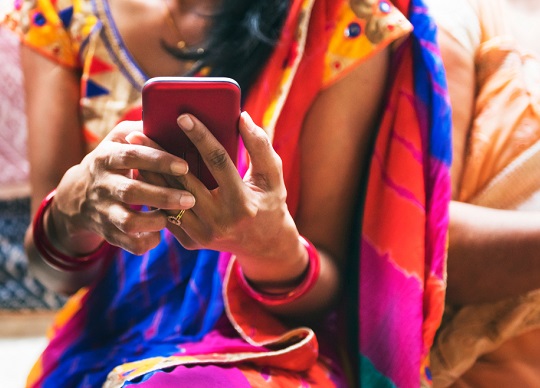 Smartphone shipments in India grew 11% in Q1 2021, to 37.1 million units, as favorable macroeconomic factors helped smartphone vendors capitalize on the growing importance of smartphones for remote education for Generation Z and for work and leisure for Millennials. Xiaomi retained its position as the market leader, with its 10.5 million shipments accounting for a 28% share. Samsung stayed in second place, shipping 7.0 million units, though its market share fell to 19% from 21% in the previous quarter. Vivo was third, with 6.7 million shipments. Oppo remained fourth with 4.7 million units, while Realme completed the top five with 4.3 million. 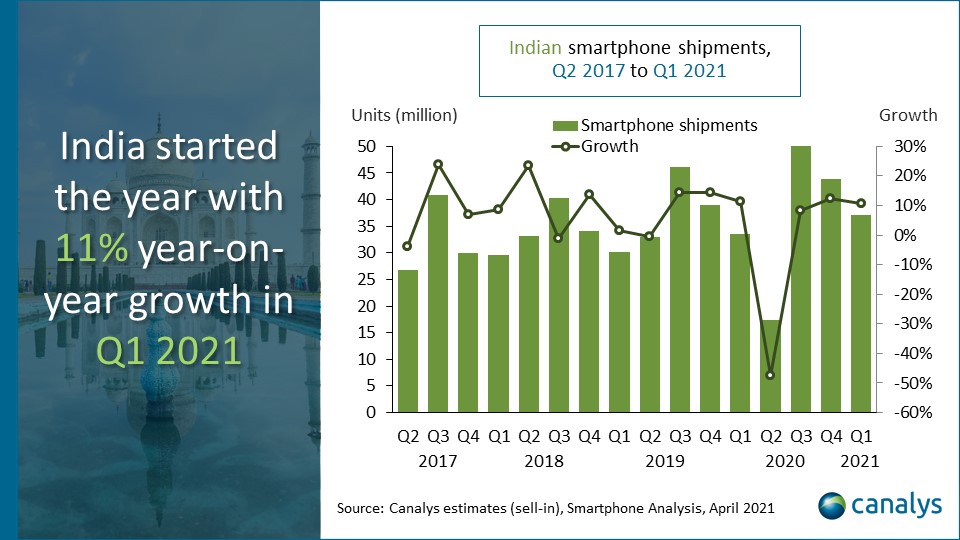 In Q1, as COVID-19 appeared to subside, the market saw a wide range of device offerings and a revived offline channel that catalyzed demand. “It was a quarter to celebrate in India, as every one of the top five vendors grew,” said Canalys Analyst Sanyam Chaurasia. “Xiaomi, for example, continued to drive its multi-brand strategy in established online channels, and is now implementing new initiatives to grow its offline presence. For example, its ‘Mi Store on Wheels’ turns road vehicles into mobile stores to reach smaller towns and rural locations. In the premium segment, Apple had a stellar performance in what is traditionally a soft quarter. Following a strong festival quarter, it shipped over a million iPhones in Q1, with demand for the iPhone 12 supported by local assembly and attractive finance offers, as well as sustained demand for the older iPhone 11. But the market-wide celebration will be short lived, as a resurgence of COVID-19 in India in Q2 will derail momentum.” 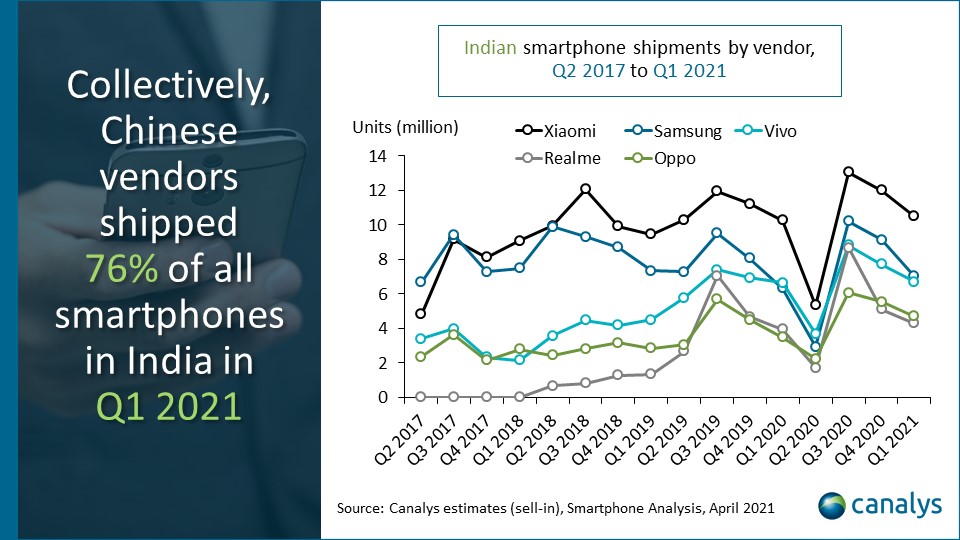 Canalys expects smartphone shipments in India to plunge in Q2 2021 due to the second wave of COVID-19. “As the geographical distribution of cases varies widely, a nationwide lockdown seems unlikely. But regional lockdowns could hamper transport of raw materials and devices due to limited inter-state travel. Hence, for smartphone brands and channels, building up optimum inventory could prove to be a hurdle in the second half of the year,” said Chaurasia. “Looking further into 2021, unfavorable macroeconomic factors will lead to a rising smartphone ASP,” said Varun Kannan, Canalys Analyst. “A combination of the ongoing supply crunch on key imported components and a weaker Rupee will make it increasingly difficult for vendors to maintain margins at current price levels. Consumers will bear the brunt of this cost, which will hit particularly hard in the sub-US$200 smartphone segment, which accounted for 81% of the market last year.”